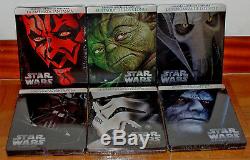 Saga star wars i-ii-iii-iv-v-vi nine steelbook 6 blu-ray action (without opening) r2. This product page has been automatically translated. If you have any questions, do not hesitate to contact us. Star wars i - ii - iii - iv - v - vi!

The ghost / clash threat of clones / revenge of the sith. New hope / lempire counter-attack / return of the jedi. Actual image of the film that will receive the buyer.

He returns to a galaxy far away with the first chapter of the legendary star wars saga. Set 30 years before the original star wars movie, episode 1 introduces a young annakin skywalker, a boy with special powers unfamiliar that the trip you just took you became the wicked darth vader. Obi - wan kenobi, the wise old Jedi from the original series, is a young and daring apprentice and known as the evil Emperor, palpatine is an ambitious Senator in the Galactic Republic. It's a time when the Jedi Knights are the guardians of peace in a turbulent galaxy and a young queen is fighting to save her people. Strar wars: episode ii attack clones takes place 10 years after the events of the ghost threat.

The galaxy has undergone significant changes, as well as those experienced by annakin skywalker, obi - wan kennobi and padmé amidala. Annakin grew up to become the qualified jedi dobi - wan, who, in turn, flourished for ward master, while padme is now a distinguished senator. Annakin and Obi - wan are assigned to protect Padme, whose life is threatened by a faction of seperatistas. The revenge of the sith.

Debating between his loyalty to his mentor Obi-wan kenobi and the seductive powers of the Sith, Anakin Skywalker decides, ultimately, turn his back on the Jedi and complete his journey to the dark side and his transformation into Darth Vader. Enjoying the grandeur of the incredible gives numerical clarity for this latest episode and relive all the epic clashes, included between anakin skywalker and obi-wan lightsaber dramatic duel. The Ghost Threat - Review of the movie by George Lucas and other members of the team. Unpublished comments from each movie interviews the file with the actors and the crew.

Attack of Clones - Review of the movie by George Lucas and other members of the team. The revenge of the sith-review of the movie of George Lucas and the other members of the team. Star wars: episodes: iv - v - vi (blu ray) star wars: the original trilogy director: george lucas, irvin kershner, richard marquand. Star wars, episode iv: new hope. The Jedi Knights have been exterminated and the rules of the Empire are wiping the galaxy with an iron fist.

A small group of rebels dared to confront the empire and made logardo with the most powerful tearful dishes of the empire: the Death Star. The most faithful servant of the Emperor, Darth Vader, must find the plans and find out where the rebel base is.

A rebel leader in captivity leia princess, sent a distress signal that is intercepted by a simple boy, luke skywalker, facing the challenge of saving the princess and help the rebels overthrow, with Colabor owning his own destiny, allies as unforgettable as the wise obi-wan kenobi, presumptuous solo han, faithful chewbaca and androids r2-d2 and c-3po. Episode v: the empire counterattacks.

It's a dark time for rebellion. After a devastating attack on its icy base in the ice of hoth poses, the rebels are spread out chasing chasing imperialists. Lucke skywalker look for the yoda master in the marshes of the dagobah planet, while solo han and princess leia are advances for the imperial fleet to reach the beautiful city of bespin clouds. The pain of darth vader, fierce to convert luke on the dark side, it attracts a trap.

Star wars: episode vi: return of the jedi. In the dramatic final chapter in the star wars saga, luke skywalker and princess leia have to travel to tatooine to release solo han. To achieve this goal must infiltrate the dangerous haunt of jabba the hutt, the most feared gangster in the galaxy. Once reunited, the team recruits tribal ewok forces to fight limpérial in the forests of the dendor moon.

The Emperor and Darth Vader conspire to turn luke skywalker to the dark side, and the young skywalker is determined to revive the spirit of his father's jedi. The galactic civil war culminates in a final confrontation between unified rebel forces and a helpless and incomplete second death star in a battle that will decide the fate of the galaxy.

The item "saga star wars i-ii-iii-iv-v-vi new steelbook 6 blu-ray action (without open) r2" is on sale since Tuesday, September 18, 2018. It is in the category "dvd, cinema \ dvd, blu-ray ". The seller is "123enrikez" and is located in san sebastian, país vasco. This item can be delivered anywhere in the world.