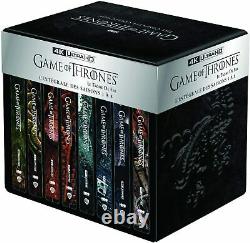 A long time ago, in a forgotten era, a force destroyed the balance of seasons. In a country where summer can last several years and winter a lifetime, sinister and supernatural forces rush to the gates of the kingdom of the seven crowns.

The confraternity of the night watch, protecting the kingdom from any creature that may come from beyond the protective wall, no longer has the resources to ensure the safety of all. After a summer of ten years, a harsh winter falls on the kingdom with the promise of a darker future. Meanwhile, conspiracies and rivalries play on the continent to seize the iron throne, symbol of absolute power.. metal case + 8 steelbooks collector - encoding hdr dolby vision and hdr10 - contains: - game of thrones (the iron throne). Season 8 (3 uhd) - 2 blu-ray of additional bonuses including game of thrones: the reunion - the blu-ray conquest & rebellion: an animated story of the seven kingdoms - a booklet with guide of episodes, summary of bonuses and photos (20 pages, French) - season 1: - audio comments (vo non-subtitled) : - david benioff and d.

Live the shooting of season 5 as if you were there (26'01, vost) - new characters and places: explore the new places, societies and cultures of season 5 (7'41, vost) - anatomy of an episode: the mercy of the mother: from the first stages of the writing to the special effects, discover the elements that created an episode that fans will be talking about for years (29'33, vost) - the real story behind the iron throne: observe historians, accompanied by George r. Martin, explore what inspired the construction of the series like the war of the two-roses and other historical events in this documentary in two parts (18'13 + 22', vost) - stories and tradition: 14 modules on the mythology of westerns told by the characters (51'24, vost) - the dance of the dragons: listen to the history of the greens and blacks, the civil war of the Targaryen that led to the fall of the dragons (20'27, most) - 4 cut scenes (7'58, vost) - listen to the story (miydd - vost) - vost) - vost - 6 Photo and daniel portman on the episode the red woman - dave hill, michael mchelhatton, iwan rheon, liam cunningham and ben crompton on the episode the house - daniel sackheim, deborah riley deco chef. And dean-charles chapman on the episode guardian of the oath - nathalie emmanuel, iain glen and jacob anderson on the episode the book of the stranger - gemma whelan, pilou asbæk, ellie Kendrick and kristian hairn on the episode the door - barrie gower (prosthetics), chris plevin (camera), ben wilon (camera) and bernadette caulfield prod. On the episode the door - jackbender, jonathan freeman dir.

Weiss, lena headey and kit harrington on the episode the dragon and the wolf - jeremy pondswa and greg middleton dir. On the episode the dragon and the wolf - from imagination to reality: behind the scenes of the artistic department: bonus in 2 parts detailing the remarkable work of the director of the stage design deborah riley and his team, as well as the process of creating the new sets of this season, including peyredragon, castral rock, hautejardin, ditdraragon, and much more (24'26 + 21'59, Vost) - fire and steel: the invasion of westernos: relive the strongest moments of the season with this bonus that includes interviews of the actors and the team explaining the creation of the favorite moments of fans (30'02, Vost) - stories and tradition: 8 modules on the mythology of westernos told by the characters (29'35, Vost) - - season 8 : - audio comments (vo non-titled) : - dave hill and deborah riley deco chef. On the episode winterfell - brian cogman and daniel portman on the episode knight of the seven crowns - miguel sapochnik, fabian wagner dir.

Weiss and emilia clarke on the episode the iron throne - jonathan freeman dir. And ben wilson (framer) on the episode the iron throne - when winter settles: making of the battle of winterfell (29'13, Vost) - duty is the fosseur of love: look at the last episode (31'36, Vost) - stories and tradition: 6 modules on the mythology of westernos told by the characters (26,49, Vost) - game of thrones: the last guard: documentary on the last season game of thrones: the last watch, real.

The item "game of thrones seasons 1 to 8 blue-ray 4k case case steelbook new" has been on sale since Sunday 30 May 2021. It is in the category "dvd, cinema\dvd, blu-ray". The seller is "max-discount66" and is located in/in torreilles. This item can be shipped to the following country: france.