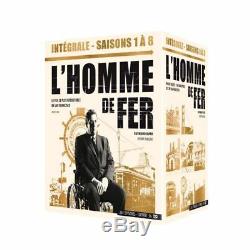 Actors: Raymond Burr, Barbara Anderson, Jessie Royce Landis Elizabeth Baur, George Kennedy. Audio: French (Dolby Digital 2.0), unknown (mono). Release date of DVD: October 5, 2016 \\\\\Police chief of San Francisco, robert dacier is a formidable policeman who, after being shot in the back, ends up in a wheelchair, lost the use of his legs.

It then returns to the police as a consultant. It is surrounded by an efficient team with which he continues to fight against crime ..

the item \category \The seller is \This item can be shipped to the following countries: Europe.
lenticularninelimitedsealedallfullslipseasonscompleteneufcabinetmoviessteelbookcollectionultrablisterplayercommissionerrarehdzetablufansintegraltrilogyultimatefnacboxblu-raynewblurayclickeditionterminatorseasoncollectorfullseries