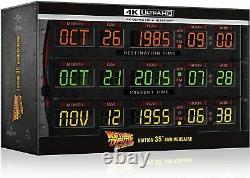 New Master 4k box \ultra hD (Dolby vision hdr10 + and hdr10) + blu-ray - the Steelbook \unreleased - the French movie script 1 (60 pages) - a poster chronology of 3 films - a mediator gibson - lenticular card mcfly family - a postcard inauguration of the clock - newspaper clippings - poster blueprint the Dolorean - a magnet \Contains: - Back to the Future (1985): the action takes place in 1985 ... For the young marty mcfly will soon be propelled in the past, specifically in 1955, on board a functioning delorean plutonium, a fireball created by the eccentric genius Doc emmet brown.

But preventing inadvertent his parents fall in love, it causes a chain reaction that disrupts the space-time and may negate his own fate ... Back to the Future II (1989): Marty and Doc to leave adventure, but this time in 2015. But a combination of circumstances, hill valley was transformed biff tannen became rich and powerful father Marty. The only way to restore the order of things and back again in 1955 ...

Back to the Future iii (1990): fulfilling a dream, doc brown found himself thrown to the far west of 1885. In danger doc brown managed to prevent his friend marty who leaves in time to save him. But Doc falls and space-time may again be changed .. the item he category \The seller is \This article can be shipped worldwide.