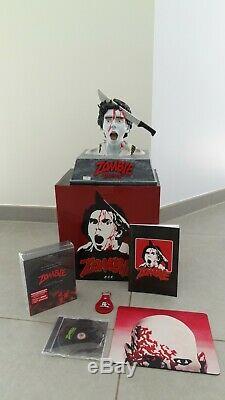 I offer you the ultimate Blu-ray box set of zombie, the famous george film. An edition worthy of the name, only findable in France and has. The 3 major versions of the film are therefore met for the first time in the territory in one box, ie. The European cinema version released in 1978 cult and indispensable. The director's cut version of us in 1979, enriching the experience of the film.

And for the first time in France, long the exclusive version, long-awaited by fans and never operated in France, presented at Cannes festival 1978! Here are the details of the contents. Blu-ray 1: European version of 120 (assembly supervised by dario Argento with the box of goblin), in a new master restored in 4K product in 2019 by esc editions under the supervision of cinematographer Michael Gornick (VF 5.1 and vost 5.1 and 2.0 mono).

Over 2 hours of bonus surprises spread over 4 blu-ray. 1 Book 152 pages: book by Marc Toullec on 6 films undead george a. You'll of course the magnificent bust resin zombie, whose number apparently there are 200 copies !! on top of that, I offer you a gift. 1 door key + mouse mats zombie.