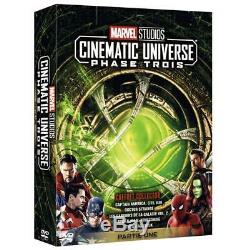 Product Description Product Description Contains: - "captain america: civil war" - "doctor strange" - the guardians of the galaxy vol. 2 "-" spider-man: homecoming "-" thor: ragnarok synopsis contains: - captain america: civil war (2016) steve rogers is now at the head of the avengers, whose mission is to protect humanity. As a result of one of their interventions that caused significant collateral damage, the government decided to set up a command and supervision organization. This new situation provokes a split within the team: steve rogers remains attached to his freedom to engage without government interference, while others are behind tony stark, who against all odds, decides to submit to the government ...

Stephen strange, a talented neurosurgeon victim of a tragic car accident, must put his ego aside and learn the secrets of a hidden world of mysticism and alternative dimensions. Based in new york, in the greenwich village neighborhood, doctor strange must play the intermediaries between the real world and what lies beyond, using a wide range of metaphysical skills and artifacts ... The guards of the galaxy vol. 2 (2017) peter quill, rocket, drax, gamora and baby-boy crush a monster that threatened the people of the rulers. As a reward, the priestess ayesha delivers to the vigilantes nebula, the evil sister of gamora. But before leaving, rocket steals a lot of piles to the sovereign. Outraged, the latter launched its fleet in pursuit of the guardians. A magnetic phenomenon that destroys all the armada, the ship of the fugitives crosses a portal which leads them near? Ego, a heavenly and almighty being who claims to be the father of Peter. Spider-man: homecoming (2017) after his spectacular debut in captain america: civil war, the young peter parker gradually discovers his new identity, that of spider-man, the superhero thrower of canvas.

Galvanized by his experience with the avengers, Peter returns home to his aunt may, under the watchful eye of his new mentor, Tony Stark. He tries to get on with his life before, but deep inside him, peter dreams to prove himself that he is more than the friendly superhero of the neighborhood. The appearance of a new enemy, the vulture, will endanger everything that matters to him ... Thor: ragnarok (2017) deprived of his powerful hammer, thor is held prisoner on a distant planet on the borders of the universe.

To save Asgard, he will have to fight time to prevent the ruthless hela from accomplishing the ragnarök - the destruction of his world and the end of the Asgardian civilization. But to achieve this, he will first have to fight a titanic fight of gladiators against the one who was once his ally in the avengers: the incredible hulk ... Actors: Chris Evans, Robert Downey Jr. Paul rudd, emily vancamp, tom holland directors: joe russo, anthony russo, scott derrickson, james gunn, jon watts audio: german (dolby digital 5.1), english (dolby digital 5.1), turkish (dolby digital 5.1), french (dolby digital 5.1), english, turkish, german, french subtitles: french, dutch, german, arabic, english, turkish subtitles for deaf and hard of hearing: english region: region 2 this dvd will probably not be displayed outside of europe. Number of discs: 5 studio: marvel date of release of the DVD: November 23, 2018 duration: 634 minutes.

The item "dvd marvel studio cinematic universe phase three chris evans, robert down" is for sale since Tuesday, January 1, 2019. It is in the category "dvd, cinema \ dvd, blu-ray". The seller is "around_the_clock" and is located in / orleans. This item can be shipped to the following countries: european union, canada, switzerland.