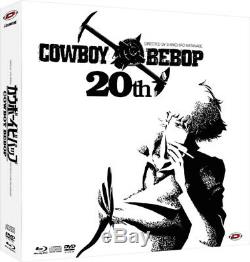 Cowboy bebop full - 20th Anniversary Edition [Blu-ray] + dvd. Humanity had to leave the earth, devastated by an accident that also altered lunar orbit. Crammed into colonies, the survivors survive as they can, scattered throughout the solar system. In this huge space, crime has spread from planet to satellite. In response, the authorities employ bounty hunters. Spike is one of them.

Aboard bebop, with its associated jet, he traveled the solar system in pursuit of the juiciest bonuses. But it hides a mysterious past, marked by a lost love and pain never healed. A past that will come back to haunt him. Collector's Edition (very) limited \Special package size 33 laps (31x31cm). Artbook 94 color pages, containing 24 illustrations specially acquired.