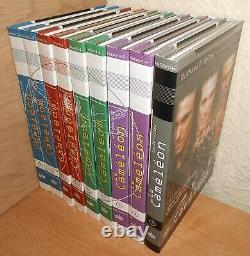 The complete 86 episodes of the series + the two TV films + bonus in 9 sets. N very good general condition and have only been viewed once.

Possibility of discount of 30 euros (so 255 euros instead of 285), contact me before the purchase for this. Additional reduction of 9 euros in the case of payment by bank transfer. Jarod (whose family name is unknown), a man held for 33 years in "the center", a secret foundation. With exceptional intelligence, jarod has been subjected since his earliest age to simulations, reconstructions of real situations where he had to reproduce the mental pattern of people who took part in these events.

When he learns the evil objectives of many of these simulations, he decides to escape. Culpabilized by the use of the results of his simulations, he decides to become a secret vigilante. Incorporating different backgrounds, making himself known as a professional or an authority, he dispossessed a criminal, then placed him in a situation of inferiority during a reconstitution of his crime in order to appease him and force him to confess.

His exceptional intelligence allows him to assimilate in a short time any profession (photographer, free-fall monitor, doctor), or at least learn enough to give the change to real professionals (he rarely gets unmasked). On the other hand, he has only a very limited knowledge of the codes of society and popular culture, which he slowly integrates through sweets, toys and other anecdotes. Jarod has retained a rather childish and naive personality because of his isolation, but this does not prevent him from bonding very easily, being of a very friendly nature. However, he also lets appear a more frightening facet of his personality when he takes pleasure in tormenting the criminals who are victims of his reconstitutions.

Along with his small investigations, he tries to learn the truth about his origins, playing the duality of his relationship with the psychiatrist sydney - almost adoptive father - whom he contacts regularly, although they have a continuation/prosecution relationship. He is constantly being chased by sydney, Mademoiselle parker, the director's daughter (and childhood friend) and computerist broots, whose mission is to bring him back to the center. Other characters, such as the worrying m. Lyle, will appear afterwards, while m. Raines work in the shadow with the triumvirat, at the head of the center.

Jarod, however, is not the only one with secrets, Mr. Parker having a darkest past. For the belgium: 5,75 euros via global relay or 10 euros via the post office.

Contact me for other countries! Possibility to come take the show to my home. The item "Integral dvd le chameleon the pretender saisons 1-2-3-4 + les 2 telefilms +bonus" has been on sale since Thursday 25 March 2021. It is in the category "dvd, cinema\dvd, blu-ray". The seller is the "collector" and is located in/in cheratte, cork.