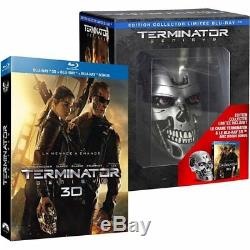 Shipping from France under 24 / 48h. Product Description Product Description Contains: - The active blu-ray 3d film - The blu-ray 2d film - The blu-ray bonus - The skull terminator (h 11cm x 11cm xp 12cm) synopsis the leader of the resistance John Connor sends sergeant Kyle Reese in the past to protect his mother, Sarah Connor and preserve the future of humanity. Unexpected events provoke a temporal fracture and sarah and kyle are found in a new version of the past. They discover an unexpected ally: the guardian. Together, they face a new enemy.