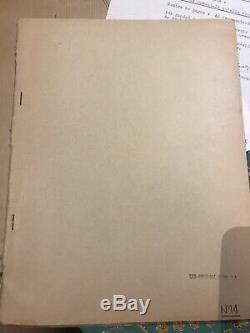 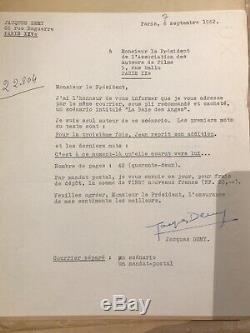 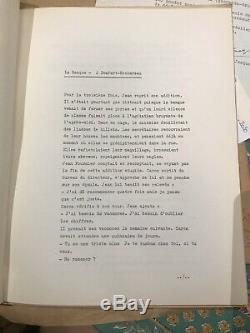 Original Screenplay typescript \Condition: Good condition. An exceptional document: it is the first screenplay of the film \The script of 42 pages, is still in the envelope dailleurs denvoi original, sealed with wax, posted September 7, 1962, accompanied dune letter signed by Jacques demy. This is a version of the earlier scenario to those known, including those filed with the French Cinematheque in Jacques demy funds. In short, a piece of history of film and the career of the director of \Released March 1, 1963, the Bay of Angels is to interpreters main Jeanne Moreau and Claude Mann. Summary: small bank clerk, Jean Fournier (Claude Mann) is introduced to the game by his colleague Caron.

It begins with insolent luck. A bit of spirit of opposition to his father, industrious craftsman, he will spend his holidays in Nice to try the casino.

There jackie meeting (Jeanne Moreau), who said \For Jackie, this is first a way to \But also love his way, and when jeans, sober, is resigned to leaving to join Paris, she finally lets his last chance to play for the follow. The item \The seller is \This item can be shipped to the following countries: France.